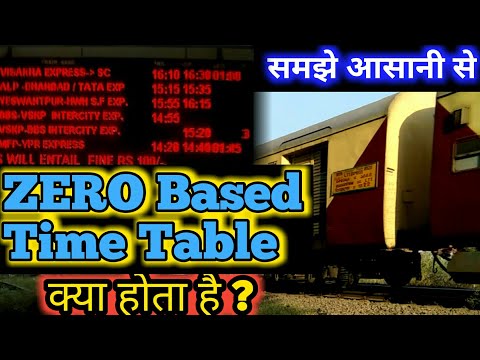 ·         Zero base means plan the time table from scratch/zero.  To begin doing a job/activity completely from the beginning.

·         If one train stoppage scrapped in a particular station, the railways will ensure stoppage of alternate trains on those stations.

·         There is a tradition in IR, to introduce a new time table from 1st of July every year.  However, due to Covid-19 pandemic, the operation of trains is closed all over the country, except special trains.

·         So it is easy to create a zero-based time table and implement the same, once the pandemic eases out.

·         A committee under the chairmanship of General Manager in each Zonal Railway will prepare a plan on the important areas like operation, maintenance, construction etc in its zone and send its report to Railway Board.  Accordingly,  a new time table will be prepared.

·         Railway Board would tie up with the Operation Research wing of IIT, Mumbai for Zero-based Time Table.

Some of the proposals are:

2.       Trains with less than 50 per cent occupancy would be discontinued

3.       Stations where earnings are very less or volume of ticket sales not satisfactory, the stoppages would also eliminate.

5.       Minimum of 50 passengers embarking and disembarking in a day -  Criterion for keeping a stoppage.